Dénia is the capital of the administrative division of La Marina Alta and is situated an enviable location on the Costa Blanca: in the north of Alicante province between the cities of Alicante and Valencia (91 km) from Alicante and 103 km, from Valencia, approximately).

The visitor who comes to Dénia, at any time of the year, can combine the calm of the sea with an in-depth discovery into its culture, fiestas and traditions.
To complete your stay in Dénia, do not forget the broad range of open air activities that can be practised in this coastal city together with it well-known and excellent Gastronomy. 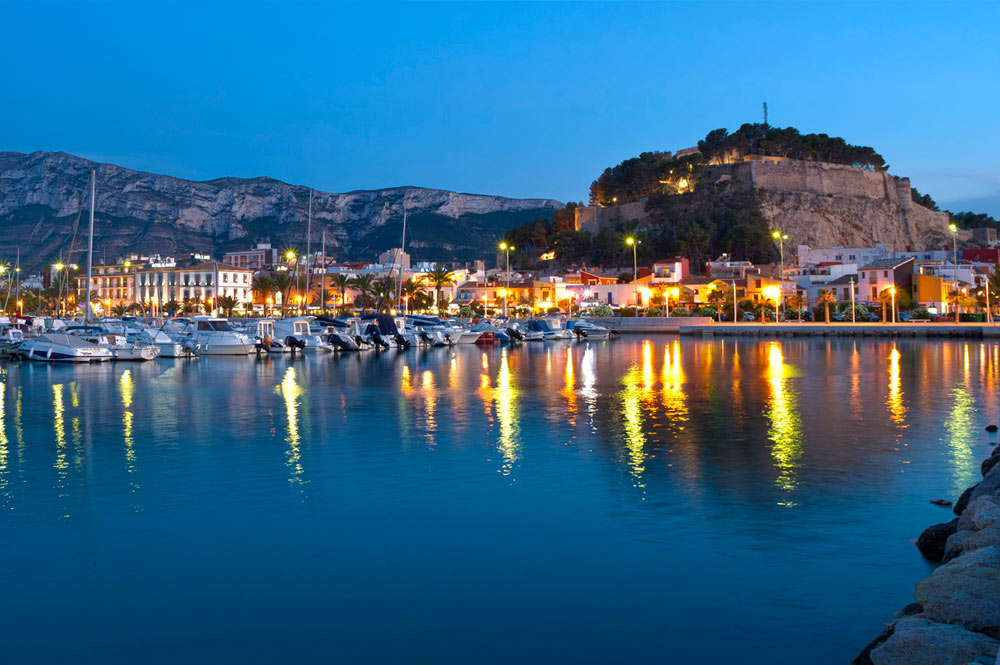 The privileged location of Dénia has converted the city, historically, into a settlement of different cultures. The Iberians, the Romans, the Muslims and the Christians have all lef their city.
It was Civitas Stipendiaria and then Municipium during the Classical age. During the 11th century, is converted into an opulent and cultured Taifa Kingdom. With the Christian conquest, Dénia became the capital of the County, and then of the maquisate, being a good example of a modern city until succumbed during the war of succession. In the 19th century Dénia recovered its economic pre- eminence thanks to the expansion of the raisin trade.
From early 20th century until the sixties, Dénia´s economy was based on the citrus production and the toy industry. The development of turism and fishing started from the on. 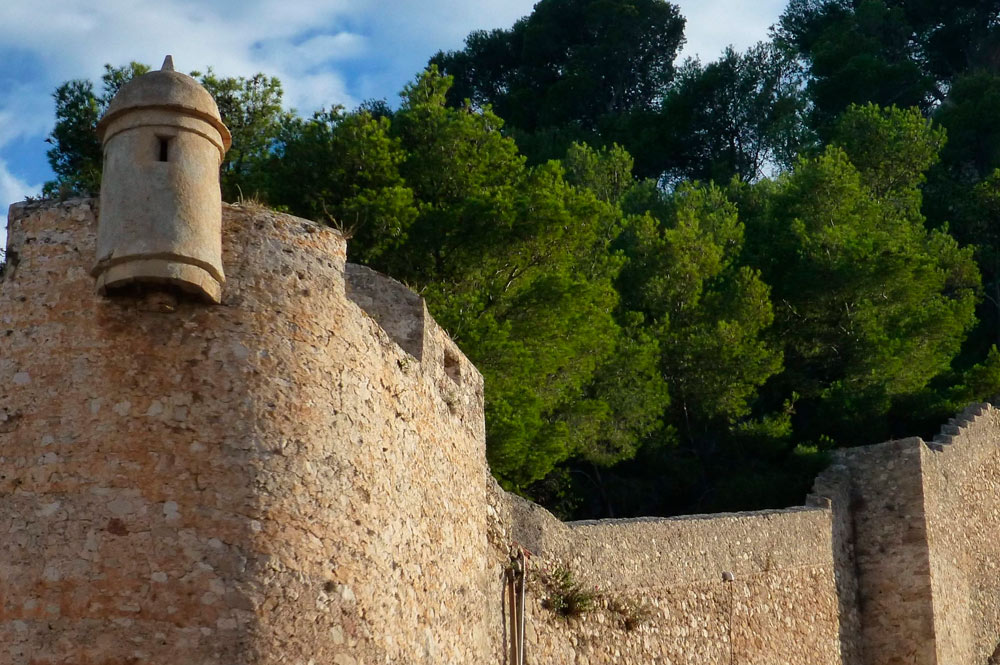 The Castle is placed on a slight by the sea and is at the heart of the city .On the hillside remains
of dwellings and fortifications from the roman Dianium have been discovered.
It desing dates back, to the islamic period between the 11th and 12th centuries. Since then, different reforms are reflected in its architecture.
*To underline the “Portal de la Villa” access gate to the Castle, Almohade period style.
*The red tower and the council tower both from the Christian period (15th).
*The old tower (Vila Vella) outdoor area with the the ruins of medieval houses (14th)
*The Bastion Baluard, defensive tower (13th) that controled the entrance to the old town by its main gate.
*The Bastion Gate (El portal del Baluard).Islamic origin. It has 3 arches from 3 different ages, we highlight it arab horseshoe arch.
*The Governor,s Palace ( El Palau del Governador),where is located the archaological museum, under the auspices of the Duke of Lerma and Marquis of Dénia ( 16th). It was part of the Marquises Palace.

The Castle ceased to have a defensive – military funtion in the 19th century when it was transfered to private ownership and it returned to public use in the 20th.

Others monuments and Museums for visit
*The Toy Museum *Ethnological Museum *Archaeological Museum *The Sea Museum
* Church our lady of the Assomption * San Antonio Church *Church our Lady of Loreto
* Streets, Corners and Squares * Ancient Neighbourhoods:
*Baix la mar *Les Roques *Historical City Center.
In Dénia there are beaches that suit all tastes, full of activities or unfrequented, long sandy beaches or small rocky coves shaped by the sea. Altogeth, 18 kilometres of coastline. 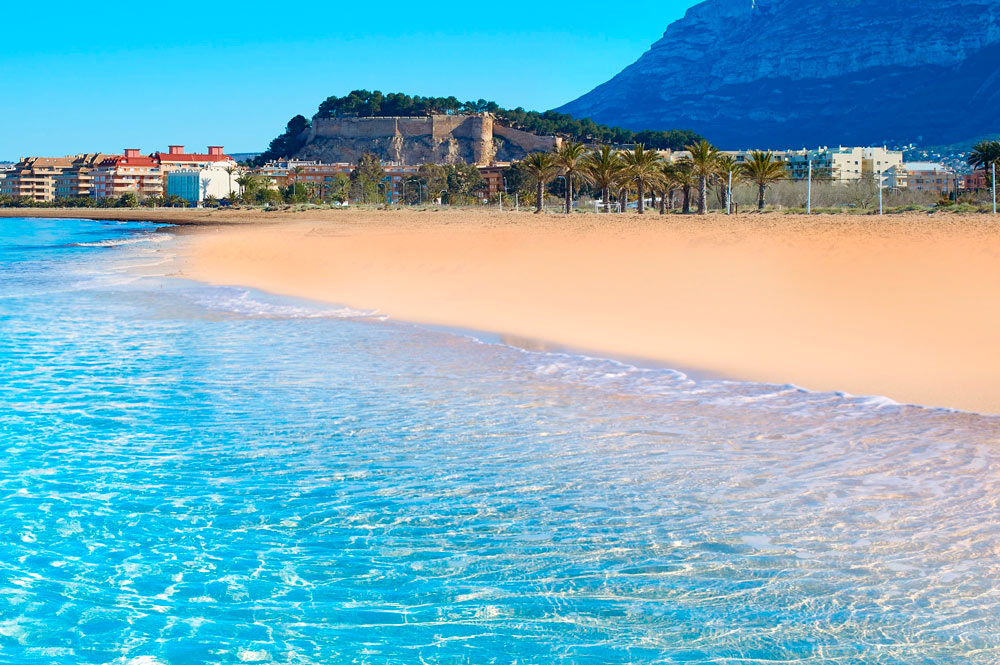 Las Marinas Beaches (To the north of the city)
The large sandy beaches of Las Marinas:
Punta Raset,Les Marines,Les Bovetes,Els molins,L´Almadrava ( sans and Pebbles).,Les Deveses.
These are flat beaches with shallow water,perfect for sunbathing with a gentle breeze for swimming or walking by the seashore.
Accessible beaches for disabled people: La punta del Raset and Les Bovetes.

Les Rotes Beaches (Southerm area)
The first beache is La Marineta Cassiana (sandy) and then the amazing rocky coves, of
Les Rotes, which recibe different names along the cast:
El trampolí, La punta Negra,Arenetes, and Cala (naturisme use).Here you will discover crystal clear warm waters where many species of animal and vegetable live.
The San Antonio Cap Marine Reseve,a proteted area where fishing is prohibited and the practice of diving is limited,comprises the most of the rocky coves of Les Rotes until the San Antonio Cape.
Accessible beach for disabled people: La Marineta Cassiana.
Beach recommended for the pratice of water sport activities: You can practise snorkelling in Les Rotes area (Marine Reserve). For diving in the Marine Reserve a special permission in required so you can obtain it at dirección territorial, agricultura, pesca, alimentación y aguas de Alicante. 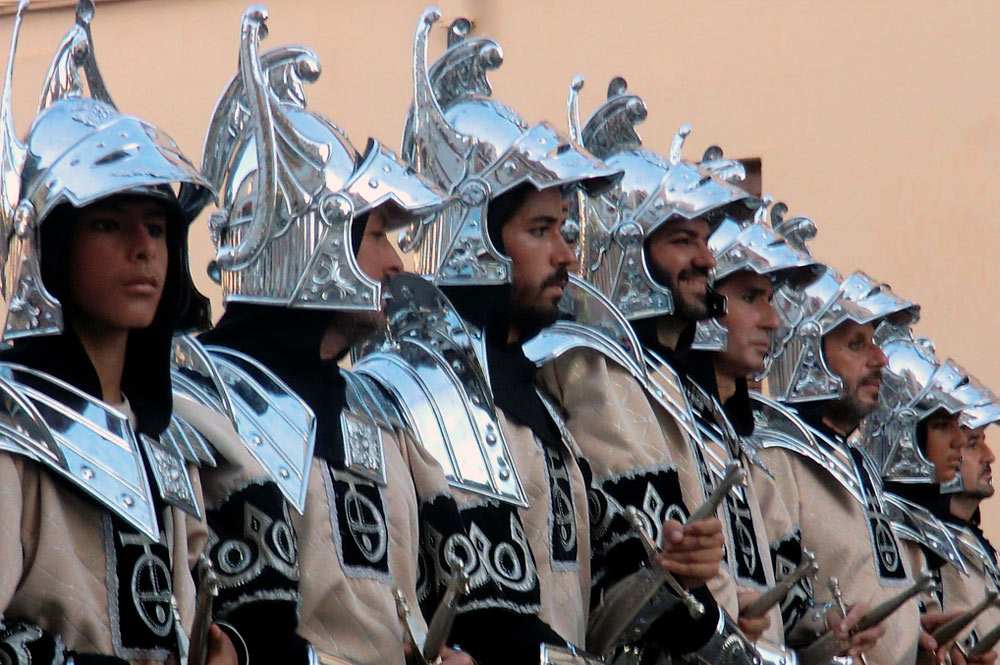 August: from the 13 to 16 August the Moors and Christians march through the streets of Denia dressed up in their best robes. Entertaining and colourful fiestas devoted to San Roque that year after year attracts the interest of visitors from all over the world.

It commemorates the battle between the Christians and the Arab which took place in 1276.

The avenue of Marqués de Campo, the cosmopolitan setting for the festivities of Moors and Christians, is complemented by the fisherman’s quarter, the most popular and gregarious
in town.
Denia is the best place to Rest, for Spanish courses, to pamper the body with its wonderful gastronomy and to learn history.
Denia transports you to other times …
Come to Denia and you will not regret it !! 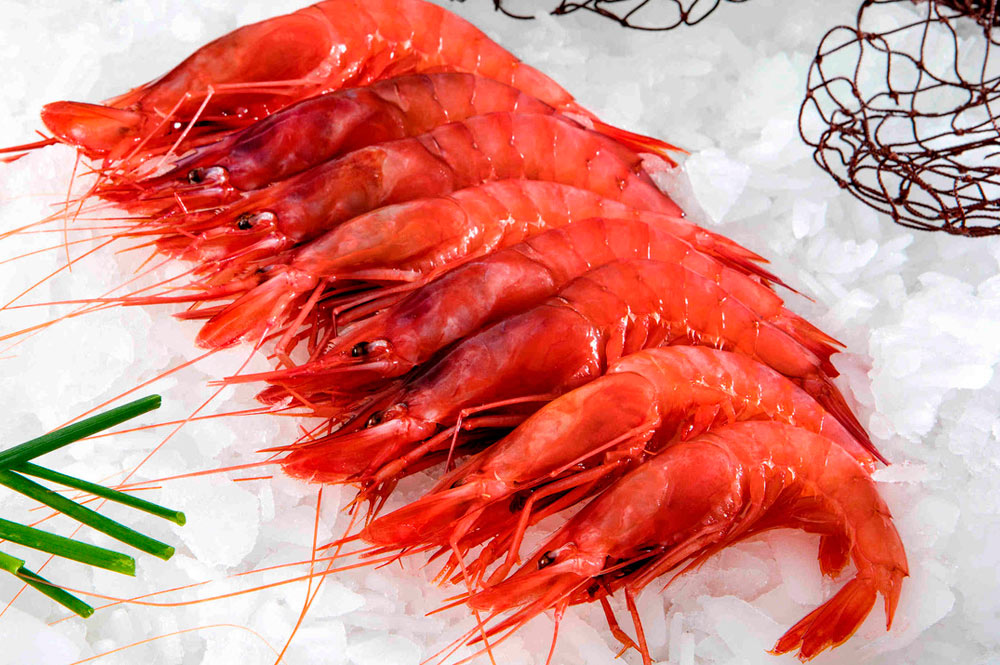 Sea Urchin, as delicate as Caviar