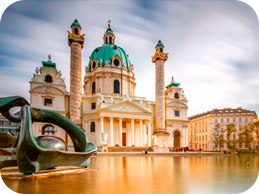 Vienna is the national capital, largest city, and one of nine states of Austria. Vi-enna is Austria’s most populous city,It is the 6th-largest city by population with-in city limits in the European Union.
Until the beginning of the 20th century, it was the largest German-speaking city in the world, and before the splitting of the Austro-Hungarian Empire in World War I, the city had 2 million inhabitants. Today, it is the second-largest German-speaking city after Berlin.
In 2001, the city centre was designated a UNESCO World Heritage Site. In July 2017 it was moved to the list of World Heritage in Danger Additionally to being known as the «City of Music»due to its musical legacy, Vienna is also said to be the «City of Dreams», because of it being home to the world’s first psychoanalyst Sigmund Freud. 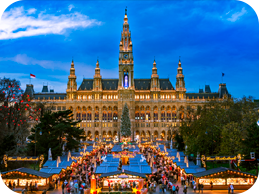 Art and culture had a long tradition in Vienna, including theatre, opera, classical music and fine arts. The Burgtheater is considered one of the best theatres in the German-speaking world alongside its branch, the Akademietheater.
Vienna is also home to a number of opera houses, including the Theater an der Wien, the Staatsoper and the Volksoper, the latter being devoted to the typical Viennese operetta. Classical concerts are performed at world-famous venues such as the Wiener Musikverein, home of the Vienna Philharmonic Orchestra.

The Hofburg is the location of the Imperial Treasury (Schatzkammer), holding the imperial jewels of the Habsburg dynasty. The Sisi Museum (a museum devoted to Empress Elisabeth of Austria) allows visitors to view the imperial apartments as well as the silver cabinet. Directly opposite the Hofburg are the Kunsthistor-isches Museum, which houses many paintings by old masters, ancient and classi-cal artifacts, and the Naturhistorisches Museum 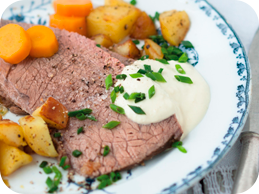 Vienna is well known for Wiener Schnitzel Other examples of Viennese cuisine include Tafelspitz (very lean boiled beef), which is traditionally served with Geröstete Erdäpfel (boiled potatoes mashed with a fork and subsequently fried) and horseradish sauce, Apfelkren (a mixture of horseradish, cream and apple) and Schnittlauchsauce (a chives sauce made with mayonnaise and stale bread).
Vienna has a long tradition of producing cakes and desserts. These include Ap-felstrudel (hot apple strudel), Milchrahmstrudel (milk-cream strudel), Palatschinken (sweet pancakes), and Knödel (dumplings) often filled with fruit such as apricots (Marillenknödel). Sachertorte, a delicately moist chocolate cake with apricot jam created by the Sacher Hotel, is world-famous..