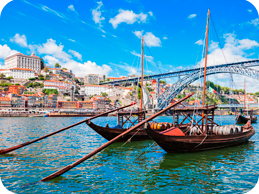 Porto,also known as Oporto in some languages, is the second-largest city in Portugal, one of the Iberian Peninsula’s major urban areas. Porto city has a population of 237,559 and a metropolitan area with 2.4 million people (2019) in an area of 2,395 km2 (925 sq mi),making it the second-largest urban area in Portugal.It is recognized as a gamma-level global city by the Globalization and World Cities (GaWC) Study Group, the only Portuguese city besides Lisbon to be recognised as a global city.
Located along the Douro River estuary in northern Portugal, Porto is one of the oldest European centres, and its core was proclaimed a World Heritage Site by UNESCO in 1996, as «Historic Centre of Oporto, Luiz I Bridge and Monastery of Serra do Pilar”. 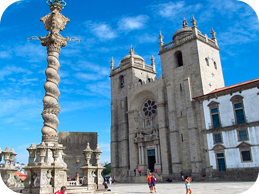 In 2001, Porto shared the designation European Culture Capital. In the scope of these events, the construction of the major concert hall space Casa da Música, designed by the Dutch architect Rem Koolhaas, was initiated and finished in 2005.
The city has concert halls of a rare beauty and elegance such as the Coliseu do Porto by the Portuguese architect Cassiano Branco; an exquisite example of the Portuguese decorative arts. Other notable venues include the historical São João National Theatre, the Rivoli theatre, the Batalha cinema and Casa da Música, inaugurated in 2005.The city has the Lello Bookshop, which is frequently rated among the top bookstores in the world. 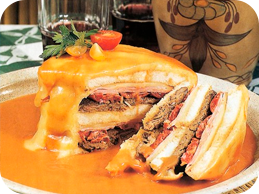 Porto is home to a number of dishes from traditional Portuguese cuisine. A typical dish from this city is Tripas à Moda do Porto (Tripes Porto style). Bacalhau à Gomes de Sá (cod in the style Gomes de Sá) is another typical codfish dish born in Porto and popular in Portugal.
The Francesinha – literally translated as little French – is the most famous popular native snack food in Porto. It is a kind of sandwich with several meats covered with cheese and a special sauce made with beer and other ingredients.
Port wine, an internationally renowned wine, is widely accepted as the city’s dessert wine, especially as the wine is made along the Douro River which runs through the city..