Nature in its purest form

Canary Islands is the autonomous community where most of the Nature Reserves are (four out of ten around Spain), have to be counted the protected zones, which are the 60% of all the territory. It is true that basically, this rich nature heritage is located in three of the seven islands of the archipelago: El Hierro, Lanzarote and La Palma. This last one is entirely protected as a UNESCO’s Biosphere Reserve. Those three plus the remaining four (Tenerife, Gran Canaria, La Gomera and Fuerteventura), represent a real paradise that invites any visitor to breakout and relax. Some of the places that catch the eye are Parque Nacional del Teide and Valle de la Orotava in Tenerife, Parque Nacional de Timanfaya in Lanzarote and Las Dunas de Corralejo, in Fuerteventura.

Deeply marked for their volcanic origin, the islands are open to a lot of possibilities: from the huge zone of white dunes and crystal-clear waters, to landscapes that seem lunar, jungle forests, remote creeks shining to black sand, millennial volcanoes, and villages that have been able to preserve their historic and cultural heritage. Besides, a cuisine as simple as delicious, which has the flavour of papas (potatoes) and mojo picón (a sauce prepared usually with spicy pepper).

To enable visitors at discovering every single corner of these places, there has been set some routes that go round the main spots of each island. And therefore the antique royal paths have been restored. The information is available in tourist offices placed in every town. 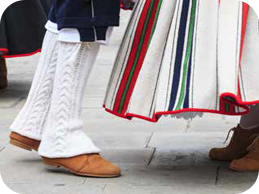 The Canaries are sweet people, mellow, nice and a bit funny, but they know how to laugh at themselves. They boast, especially of their wonderful land, its climate and its beaches.

Undoubtedly you should taste the wrinkled potatoes with mojo, the Canarian stew, the gofio soup, the ropa vieja (chickpea stew with meat), the sancocho soup, the watercress stew or the poached cheese with mojo. And of course the banana and the great variety of tropical fruit. 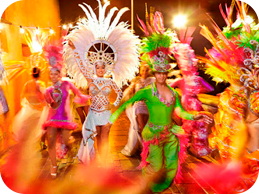 The cliché is inevitable: Carnivals in the Canary Islands are the quintessential festivity, but you should not miss the Danza de los Enanos, San Isidro Labrador pilgrimage o the Rama festivity.