Not many lands can exhibit what Asturias’ nature heritage can. In a single territory, nature force hides vast virgin extensions,
where the richest wildlife in the Iberian Peninsula takes shelter in massifs, forests, valleys, rivers and beaches. In fact, nearly a
third part of Asturias territory is considered protected nature reserve, and by the way Picos de Europa Nature Park is their
most interesting example. Indeed, back in 1985, UNESCO decided to declare as World Heritage Site the monuments of
the capital, Oviedo, and even any other in Asturias’ Kingdom. On the other hand, the coastline which is 345 km long shows a fine perspective: beaches, creeks and cheeky cliffs coexisting with the brave, dominant Cantabric Sea.

But apart from all those nature treasures, which cannot be conceived away from its own orography, the principality keeps an extraordinary artistic richness that amazes and excites the curiosity of any stranger: the asturian preromanesque art, composed by fourteen buildings erected between the VII and X centuries, represent the birth and developments of the Asturian Monarchy and what was the first Christian kingdom all over the Iberian Peninsula. An example of that are the monument of Santa María del Naranco and San Miguel de Lillo (Oviedo), and Santa Cristina de Lena and Santo Adriano de Valdediós in Villaviciosa. 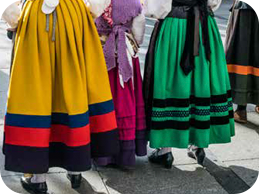 The Asturians are generous, sociable and friendly, and it is not difficult to break the ice with them. People with a fighting spirit, who are proud of their land and who have a great sense of humour.. 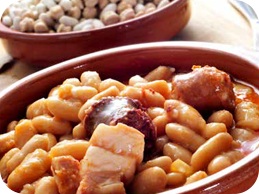 If you are invited, take note of this recommendation: fast first. The fabada, the cachopo, the chorizo cooked with cider, the pixín, the Asturian pot, the carballones, the cheese (especially the cabrales), and of course the cider.

You should visit the Lakes, the Basilica of Covadonga and the Santina virgin in the sacred cave.  We recommend canoeing down the river Sella, the Cider Fair, the San Mateo festivities in Oviedo, or the grande week of Gijón.