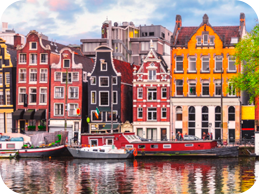 Amsterdam is the capital and most populous city of the Netherlands Amsterdam is colloquially referred to as the «Venice of the North», attributed by the large number of canals which form a UNESCO World Heritage Site.
The city is also the cultural capital of the Netherlands.Amsterdam’s name derives from Amstelredamme,indicative of the city’s origin around a dam in the river Amstel. Originating as a small fishing village in the late 12th century, Amsterdam became one of the most important ports in the world in the Dutch Golden Age of the 17th century and became the leading centre for finance and trade.In the 19th and 20th centuries, the city expanded, and many new neighbourhoods and suburbs were planned and built.
The city’s three main canals are the Prinsengracht, Herengracht, and Keizersgracht.
Amsterdam is one of the most popular tourist destinations in Europe, receiving more than 4.63 million international visitors annually, this is excluding the 16 million day-trippers visiting the city every year. 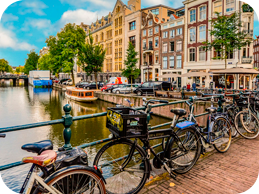 The most important museums of Amsterdam are located on the Museumplein (Museum Square), located at the southwestern side of the Rijksmuseum. It was created in the last quarter of the 19th century on the grounds of the former World’s fair. The northeastern part of the square is bordered by the very large Rijksmuseum. In front of the Rijksmuseum on the square itself is a long, rectangular pond. This is transformed into an ice rink in winter.
The northwestern part of the square is bordered by the Van Gogh Museum, Stedelijk Museum, House of Bols Cocktail & Genever Experience and Coster Diamonds. The southwestern border of the Museum Square is the Van Baerlestraat, which is a major thoroughfare in this part of Amsterdam. The Concertgebouw is situated across this street from the square 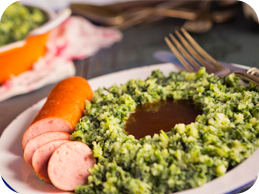 Dutch cuisine is formed from the cooking traditions and practices of the Netherlands. The country’s cuisine is shaped by its location in the fertile North Sea river delta of the European Plain, giving rise to fishing, farming, and trading over sea, its former colonial empire and the spice trade.

Traditionally, Dutch cuisine is simple and straightforward, with many vegetables and little meat: breakfast and lunch are typically bread with toppings like cheese, while dinner is meat and potatoes, supplemented with seasonal vegetables